In this week’s orchestral sketch I start a little bit different. No cantus firmus. No melody. Just a simple basic chord progression. Just three chords. That’s all! And you can be amazed by what you can do with that if you start to experiment and develop it further and further.

The steps: from piano chords to orchestrated version

As a composer you have plenty of possibilities to start a new composition. Or a new phrase in a composition. Some people like to start with writing the melody first. Others start with a rhythm. Or a chord progression. And all ways are fine and work.

I don’t know what you think, but I love the end result. I loved it so much that I used the principles that I have learned while doing this sketch in my upcoming work. The boy who wanted to fly.

Now let’s have a closer look at the start with the chord progression and the in between steps I took to develop it to a fully orchestrated version.

Just three chords to start with

This is what I started with. I wrote this sketch in the A major Scale. That means three sharps: C sharp, F sharp and G sharp.

So that’s it. Nothing special, but yet famous.

Simple motifs, yet so effective

I love to write melodies. To sit behind the piano and to just fiddle around on it. Being creative. The melody being developed underneath your fingers. And that moment when you realise that you have found another piece of the puzzle, is addicting.

And the great thing about this, is that it doesn’t have to be complex. Just simple motifs can be enough.

When we look at the melody I wrote, you probably will see a pattern.

One. It moves downwards. Listeners will recognise that immediately and will follow along automatically.

Second. We have two blocks. Call them motifs. And they follow the same steps. One step down, two steps down, one step up and two steps down. Now don’t be distracted by the triplet I wrote, that’s just a variation. The basic pattern underneath it is still in tact. And your listeners can follow along easily.

Third. It starts on the tonic and it ends on the tonic. The A of the major scale A. The first note of each bar is the base note of the chord. A D and an E.

Do you see it? It’s quite simple, but yet effective.

Movement with ostinatos and figures for harp

I have to admit that when I started this orchestral sketch I had ostinatos in mind. Eventually I ended up with something totally different. And that’s fine. But I guess that’s the reason I ended up with multiple underlying patterns in this step.

To begin, let’s have a closer look at the last pattern. It consists of sixteenth notes with a continuous repetition of two of the exact same notes. Like two A’s, two E’s, two C’s etc.. You could say, a perfectly fine ostinato figure.

So this is what I wrote initially. It sounds pretty good. But I started to experiment a bit further.

I asked myself the question, what to do if I wanted to use a harp for instance? That would change the feeling and the experience of the sketch, I know. Make it more magical I guess. But that is something that I like. So that’s fine.

And that’s the reasons I started to flip the notes around ending up with this pattern.

From piano to orchestra – orchestration

Let’s have a closer look at the choices I made in the orchestration.

The strings play the chord progression I, IV, V in the background. Each section in a range they can cover nicely.

The harp plays the fast underlying pattern. I already mentioned it. It gives a magical and enchanting feeling.

The melody is for the boys choir. The angelic voices are beautiful. The flute support them gently in the background.

I could have stopped here. I guess that would have been enough for this sketch. But I didn’t.

I gave the clarinet also a part. Accenting the first notes of the fast underlying pattern played by the harp. The bassoon plays staccato notes in the low range. And the triangle … yeah what can I say about the triangle. 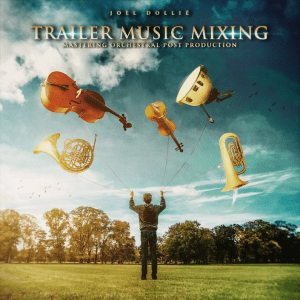